Bullying in Schools: Stopping the Cycle 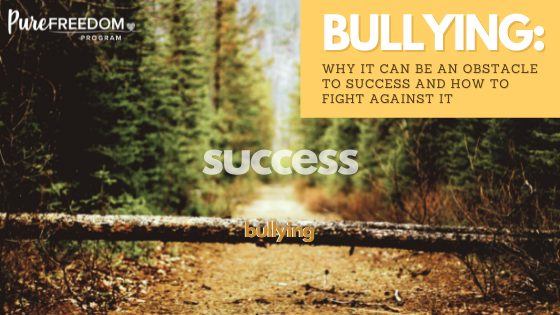 Bullying is a serious topic that can have devastating consequences on a child’s life. Therefore, it is not to be underestimated. However, discussing it may sound scary. Our goal here at Pure Freedom is not to instill fear. Instead, we seek to provide valuable information and resources to both parents and school professionals, empowering them to be a positive influence in the lives of students. Our mission is for youth to achieve optimal health, in all areas of their lives. Because bullying might sometimes stand in the way to success, what can we do to help students thrive? How can we stop the cycle of bullying?

It all starts with developing a clear understanding of what bullying is, how it takes place, and who it affects.

The website StopBullying.gov defines bullying as “unwanted, aggressive behavior among school-aged children that involves a real or perceived power imbalance. The behavior is repeated, or has the potential to be repeated, over time. Both kids who are bullied and who bully others may have serious, lasting problems”.

Bullying is different from teasing. The idea of power imbalance lies at the root of bullying. The victim is either unable to defend themselves or the abuser thinks that.

Additionally, bullying can take several forms, such as:

It involves any behavior such as pushing, kicking, or spitting on someone. Understandably, this is the most visible form of bullying, but it is also the least common. According to the National Center for Education Statistics, it is involved in only 2 out of 5 cases of bullying.

Language is another form of bullying and may include anything from criticizing, calling someone names, or yelling at them with the intention to intimidate.

This form of bullying is most common among girls. Relational bullying may involve spreading rumors about someone as well as excluding them from group conversations or events.

As its name implies, cyberbullying is a form of bullying that happens either online or through texts. Because it can be used easily and anonymously, it is very prevalent among the youth. Accordingly, Pure Freedom takes the topic of digital safety very seriously and addresses it in its School Policy Action Toolkit.

Last but not least, prejudicial bullying can take any and all forms of bullying cited above and is rooted in the hate of differences such as racial differences, sexual orientation, socioeconomic backgrounds, religion, disability, fashion, hygiene, and so on.

Who is most affected?

According to the National Center for Education Statistics, 20% of students ages 12-18 admitted that they were bullied. That corresponds to one out of five students. The report shows that:

The students who are more at risk of being bullied tend to be:

These assets can stir feelings of inferiority and jealousy in others. Bullies may also try to take advantage of smart students by forcing them to do their homework in their place, for example.

Fear and unease can, unfortunately, send a signal that the student is easy prey. This can make any existing mental issues worse, creating a vicious cycle.

Having no friends can increase someone’s risk of being bullied, as they are seen as easy targets. In the same way, this student might in turn be rejected by potential friends due to them fearing being targeted as well.

Once again, distinctive characteristics can make someone stand out more, thus attracting negative attention from bullies.

Inversely, popularity can also be a cause of bullying as other students might feel like they are a threat to their own social standing.

The consequences of bullying:

One 2018 study analyzing the relationship between bullying, sleep, and health in a large adolescent sample concluded that bullying can lead to decreased amount and quality of sleep in teenagers. In turn, those issues put them at an increased risk of developing emotional distress and mental illnesses, including anxiety and depression.

So what can we do?

It is encouraging to know that instances of bullying have gone down between 2005 and 2017. Indeed, the percentage of students ages 12-18 who reported being abused in those years went from 29% to 20%. As a parent, teacher, school counselor, or administrator, you are sitting in the front row of change. You can take action by:

Bullying can leave unresolved trauma in the life of a student. This is why the Pure Freedom program uses a trauma-informed approach to teaching. In addition to being sensitive to those issues, we aim to equip students to recognize the signs of unhealthy friendships and dating relationships, as well as how to prevent and report abuse.

We partner with over 40 schools in Northern Missouri each year. If you would like to learn more about us, our educators, and how to request a speaker for your school, visit our “about us” page.

They did a great job being honest & open with the students. This created a safe learning environment.
-Health Teacher

Thank you so much for arranging this! The information in each session was so valuable and I'm so glad my students got to hear it. The educator did a fantastic job connecting with students and presenting information in a way they'd find interesting an
-High School Teacher